Today was a travel day, and I seem to have trouble finding the right island.

The Coin of the Day is actually Euro notes, showing a continent in transition

Coin of the Day:  Euros.

When the Euro was first put into circulation, only twelve countries were going to be in the Eurozone (Austria, Belgium, Finland, France, Germany, Greece, Ireland, Italy, Luxembourg, the Netherlands, Portugal, and Spain).  Between those countries, two alphabets existed, the Latin and Greek.  “European Central Bank,” when abbreviated, had five different renderings, BCE, ECB, EZB, EKT, and EKP.  I don’t know which one of those is the Greek abbreviation, other than it can’t be the first two. (C is not a symbol in the Greek alphabet, unless someone is trying to be very creative rendering Σ.  In fact, “C” first came about that way, and the Russian use of C as an s sound, and never a k sound, is because of this.) 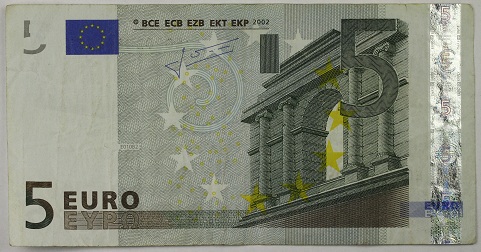 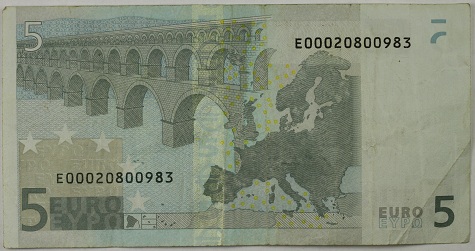 So when the original Euro notes came out, they were bi-alphabetic, rendering Euro as both “EURO” and “ΕΥΡΩ” and sure enough, there were five sets of initials for the European Central Bank.

The Euro zone has expanded significantly since then, and some of the member countries use a third alphabet, Cyrillic.  The Euro notes need updating, therefore.

So far as I could tell, only the smallest denomination, the Five Euro note, has gone through this change.  If you keep your eyes open, you can grab an old one out of circulation still, but the lion’s share are new ones.

There are now nine distinct abbreviations for Europeand Central Bank (including ЕЦБ and EČB, the latter being latin alphabet, with an extra letter from Slovak), and Euro is also spelled “ЕВРО” as well.

Minor, and subtle, but it shows a continent in transition.

I headed for the airport early, grabbing a bite to eat.  Athens is very convenient for tourists in that you can get to both the airport and the seaport (Piraeus) via the subway.  Normal fare is 1.20 (pretty cheap actually, as compared to say, the Washington D.C. Metro), but to get to/from the airport you need a special 8 Euro ticket.  You can buy a round trip for 14 Euros, provided both trips are in the same week, and this was what I had done on arrival.

So I boarded the plane, flew for four hours (food was served), and landed.

But now I had a big problem.  I was supposed to be in Sicily.  Somehow, I was on the wrong island!  Here, the people spoke Coloradoan, sort of, so I was able to work to rectify the situation.  I had to take a bus to a different airport, though, to catch the actual plane to Sicily.

Now this is where things got strange.

The bus was somehow defective.  The steering wheel was on the right hand side, the entry door on the left.

What was worse, when we pulled out of the garage, is that a fit of mass insanity had hit the entire population.  Everyone was driving on the wrong side of the road!  To his credit, the driver, showing the same aplomb that had got his countrymen through the Battle of Britain, simply went along with it.

OK, I’ll quit clowning.  I was going from Greece to Sicily by way of London, and had to change from Heathrow to Gatwick airports to make the connection.

It turned out this was the only cheap option for this travel, that didn’t involve a full day layover somewhere I wasn’t hugely interested in seeing.

So I (sort of) got to see the UK.  A freebie.  If the layover had been a couple hours longer, I might have tried to take the train and at least poked my head aboveground near Westminster or something like that.  It was raining, though, so just as well.

Gatwick offered a variety of (expensive) options for lunch, but none of those options were ploughman’s, which I really wanted to try, so I defaulted to fish and chips.

The flight to Catania, Sicily was three and a half hours, more food on the plane.  I was full, but not bursting (everything had been pretty small other than the fish and chips) by the time I landed at about 6:30.

One of my fellow passengers assured me, based on his own experience visiting all kinds of places, that Syracuse would blow away everything I’d seen so far.  Even Ephesus.  Well, that’s encouraging!

And now I must back up several months and explain how it is that I came to be on this trip in the first place.

My father turned 80 this year, and he chose to hold the “official” celebration in Sicily.  It’s where his father was from, and he has always felt an emotional connection to this big rock Athena chucked.  (I suspect she didn’t throw like a girl.)

So he had designed an itinerary, arranged for a bus to schlep people all over the island, and all anyone had to do to join the thing was to get to and from Sicily, and reserve their hotel rooms.

This whole bit in Turkey and Greece, and the stuff I will do next week, are bits I tacked on to either end of the “core” part of the trip, checking a ton of things off my bucket list.

So at the hotel I was met by him, a fair number of friends and family from Colorado Springs and New Jersey, and a bunch of second cousins I had never seen or heard of before, all of them descendants of my grandfather’s older brothers and sisters.  He was the youngest of eleven children, and had himself not had children until his mid thirties, so you can imagine those second cousins were mostly quite a bit older than I was.

Eight hours in airplanes, four hours making a connection.  Compared to my time in Greece, this was actually a “down” day, not strenuous in the least.  Alas, there also wasn’t anything worth taking a picture of.  (I briefly considered a pic of all those maniacs driving on the wrong side of the road, however.)

And oh yes, this was Italy.  The hotel had a restaurant and as it happened I was the last arrival, so everyone was starving, waiting for dinner.  Except me, of course, still powered by fish and chips.

The hotel was fairly expensive, as I said, but in return, I got a bathroom that wasn’t an obvious retrofit into a building from the 1800s (or earlier) with a tiny, tiny shower I couldn’t turn around in (or have the curtain cling to me).  Instead, this was a fancy bathroom.

But Sicily was if anything even hotter than Turkey and Greece had been, and this hotel was very modern.  Meaning that you had to put your key card in the slot to get anything to work in your room, including the air conditioning.  So instead of having the room get comfortably cool while I was eating the smallest item on the menu, it continued to swelter, because they only gave me one keycard.  (It probably would have taken all night to truly cool off, either way.)  I understand wanting to be energy efficient, but after dropping nearly a hundred euros a night on this place, I would think that the guest’s comfort would be included somewhere in the price.

Tomorrow will be the first day of actual tourism for the Sicilian part of the trip.